Opposition leader Alexei Navanly was among hundreds detained in Russia Monday, as protests raged across the country in a sea of rallies that coincided with Russia Day.

Thousands turned out to voice dissatisfaction with the government on Monday, the latest in a series of demonstrations to engulf Russia this year. More than 100 cities held rallies, including the major hubs of Moscow and St. Petersburg, where crowds were especially massive. Independent political persecution monitor OVD Info said that at least 750 people were detained in the protests in Moscow, with an additional 900 detained in St. Petersburg.

While the protests have previously been marketed more as “anti-corruption” demonstrations rather than an indictment of Russia’s government, Monday’s turnout seemed to indicate that protesters have become bolder and more willing to speak out. Video footage of rallies showed Russians calling for a “Russia without Putin” and yelling “Putin is a thief!”, while also throwing in a “Happy Russia Day!” in honor of the ongoing national holiday. 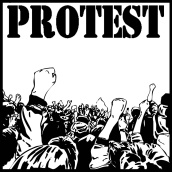 Detain: To prevent someone from proceeding, often by keeping them under restraint or custody.

Protest: To object or disapprove something.

Turn out: To go somewhere to attend a meeting.

Dissatisfy: Opposite of satisfy.

Engulf: To surround something and cover it completely.

Indictment: Accusation of a serious crime.

To know more about us, please visit our Facebook Page.

To hire one of our trained team members, please browse our study plans.