The chart below gives information on the percentage of British people giving money to charity by age range for the year 1990 and 2010.

Summarise the information by selecting and reporting the main features and make comparisons where relevant. 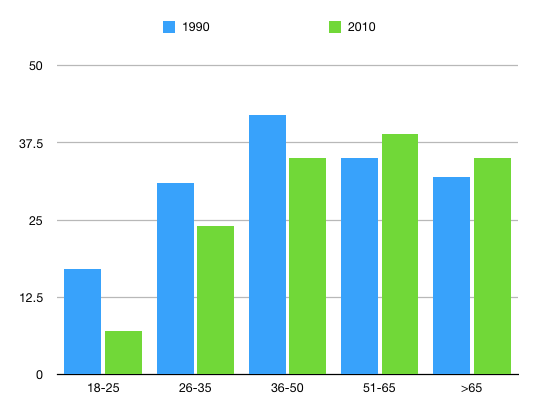 The given bar chart presents information on the percentage of Britishers in different age groups donating money to a charity in 1990 and 2010. Overall, while the age group 36 to 50 was dominant donator in 1990, those in the age group 51 to 65 became largest donors in 2010. (49 words.)

You can choose to structure the answer on the basis of years. Create one paragraph each on 1990 and 2010. Use the 2010 paragraph to make comparisons.

Alternately, you can structure the answer on the basis of INCREASE and DECREASE. I will prefer writing an answer using this structure.

The percentage of people in the age group 18 to 25 making donations remained the lowest in both years and fell drastically from 17 percent to just 7 percent during this period. The percentage of 26 to 35 age group contributors decreased by more than six percent and those of 36 to 50 age declined marginally by a similar number.

While the percentage of donors increase till age group 36 to 51 in 1990 and declined thereafter, the contributors increased consistently till the age group 51 to 65 in 2010 and then declined.