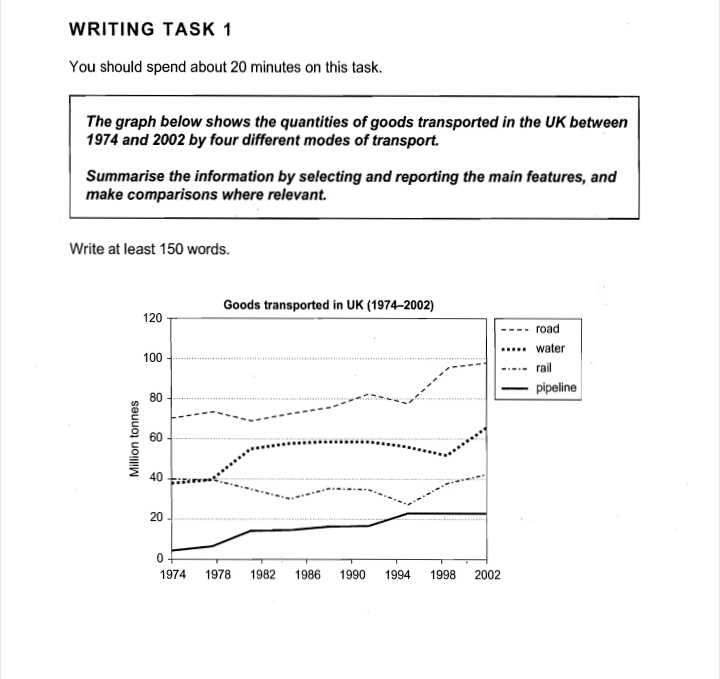 Here is the response of student 1 and student 2.

The line graph depicts the quantity of commodities, measured in million tonnes, transported via four different routes (road, water, rail, and pipeline) in the U.K between 1974 and 2002.

Overall, the  amount of goods transported increased from the initial to the final year. Throughout the study period, road was the most preferred route whereas pipeline was the least preferred one. (Hit the nail on the head! Good job!)

Road transportation was widely popular throughout the 28 year period. In  the beginning, about 70 million tonnes of goods were transported via road. . Despite a few drops, this figure rose gradually till 1995 after which it spiked to reach 98 million tonnes in 2002. . (The question is about MAIN FEATURES. Not every feature.)

Transportation via pipelines was the lowest in all the years. Only about 5 million tonnes were transported in 1974 which increased gradually to just over 20 million tonnes by around 1995 and maintained this amount till the final year.

Though this answer is a bit long, it is well-written. You can reduce the number of words in the body paragraph 1.