The bar charts below show the number of hours each teacher spent teaching in different schools in four different countries in 2001.

Summarize the information by selecting and reporting the main features, and make comparisons where relevant. 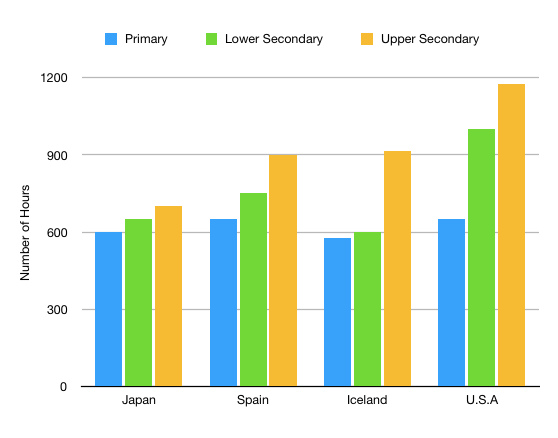 The given bar chart depicts the information about the teaching hours spent by teachers (Alternative: … about the number of hours teachers spend in …..) in three categories of school  in four countries namely, Japan, Spain, Iceland, and the USA in the year 2001.

As it can be seen clearly that in all countries teachers spent more hours at Upper secondary level as compared to the other two.  (Obviously, “THE OTHER TWO” refer to primary and secondary levels).  It is notable that in USA teachers gave more hours in teaching at all levels as comparatively other three countries.  (Minor structural issue. But you’ve communicated the idea clearly.)

, (You begin the explanation here. No use of furthermore.) educators from Iceland spent  fewer/ lesser (fewer better than lesser) hours at the Primary level as compared to other countries. Undoubtedly, at the upper secondary level, tutors from Spain and Iceland spent similar hours , which are 900 hours (better connect 900 hours to hours, not level.). As a contrast to these  (these includes both) countries teachers from Japan spent fewer hours with the difference of 200 hours (700 total) at Upper Secondary Level.

(The idea is not communicated due to lack of structure. Watch the video.)