The bar chart below shows the proportion of men and women living alone in Wuawua Land in the year 2016. The pie-chart compares the number of rooms in one-person households.

Summarize the information by selecting and reporting the main features and make comparisons where relevant. 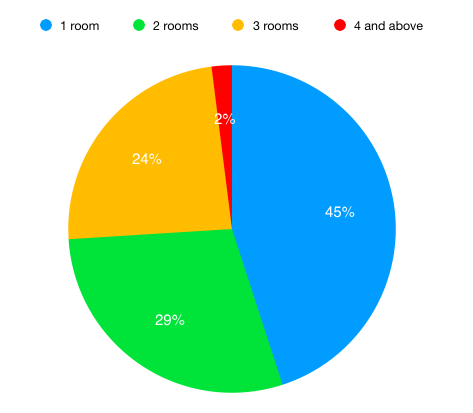 The bar graph presents the percentage of people, categorized by gender and age groups, living in Wuawua Land in the year 2016. The pie chart shows the number of rooms in one-person houses.

Overall, the females living alone slightly outnumber the males and the most common age group for females is 80 and above, while that of males is 35 to 49 years. The land has more houses with one room than two or above.

The number of males living alone on this land grew as the age increased, (1) until after the age of 50 years proportion decreased gradually by more than half. In contrast, the trend for females was the opposite of it. The fraction of men and women  were equal for age group 50 to 64 years.

As the age from 15 to 49 years, the proportion of men in comparison to females living alone increased from about 55 percent to 68 percent. Read the sample answer HERE.

The pie-chart depicts that about 45 percent of the homes have one room, whereas just under a third of the houses have two rooms. Around a quarter are 3-roomed houses, whilst an insignificant proportion (= singular)  has four or more rooms.

Contact me for writing polished and effective Statement of Purpose.